Playboi Carti was arrested in Atlanta yesterday after being caught with numerous guns and drugs. 😩

Carti, whose real name is Jordan Carter, was reportedly stopped by police on Thursday for an expired vehicle tag on his Lamborghini. The cops claimed to have then found 12 bags of marijuana, three guns, Xanax, codeine and oxycodone, according to a Friday announcement from the Clayton County Sheriff's Office.

He was later brought into custody along with another passenger, Jaylon Tucker. Per the news release, Carter and Tucker were "facing the wall at Georgia’s toughest para-military jail known as the Hill-ton” on Friday morning.

A few hours later, though, the Atlanta Journal-Constitution reported that Carti had been released that same morning.

You can view his mugshot below. Damn! 😰

Before his release was confirmed, Gunner Stahl, a hip-hop photographer and Carti's close friend, provided a brief word on the Atlanta artist's status in response to fans chanting "Free Carti" online.

"Carti is at home , let's stop the "free"stuff thanks :)," Gunner tweeted and later deleted. 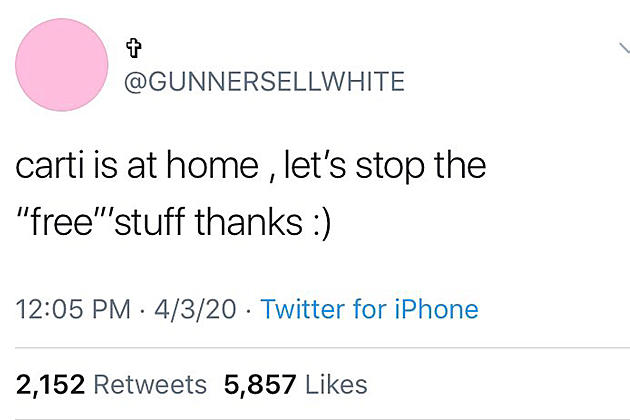 Unfortunately, this isn't the first time Carti has run into trouble with the law.

A little over a year ago, he was convicted of trashing a tour bus and punching its driver in Scotland. He was ordered to pay over $1,000 in damages.

In 2017, Carti was also arrested for domestic battery at Los Angeles International Airport after getting into a physical altercation with his then longtime girlfriend. All charges were dropped about a month later.

On the flip side, Carti, as well as his girlfriend Iggy Azalea, were the victims of a robbery in November 2019. Someone reportedly swiped more than $350,000 worth of jewelry from their Atlanta home.

With Tucker still in in custody following Friday's bust, it makes you wonder: Will he take the fall for King Carti in order to help him finish Whole Lotta Red?  (Just kidding. 😅)

Beyoncé Returns to the Stage in Exclusive Dubai Performance

Lil Uzi Vert Announces New Music Is on the Way